How Do You Know If There Is Asbestos in Your Walls?

By Stan G. in Removal 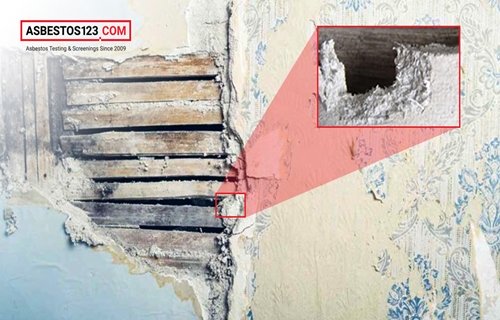 Asbestos is a fibrous material, mined from the ground, and mixed with many different materials such as cement, sand, or plaster, to provide durability and thermal insulation. The miracle material that helped sustain the strong and steady growth of the building industry in the mid-20th century, can hide in places where nobody would expect it, and where it is hardly visible. For example, asbestos lurks in the walls of many homes built from 1930 through the 1970s. The presence of asbestos is not generally considered to be harmful unless the material is broken, deteriorating, or disturbed in such a way that fiber-containing particles are produced.

If Installed Before 1980, Both Interior and Exterior Walls May Contain Asbestos

Asbestos in walls can be present in many forms, including concrete, plaster, and drywall. Some walls might also have asbestos insulation.

Asbestos concrete/cement walls - Up until 1980, asbestos was a common addition to cement products and materials for building construction as it gave the finished product durability, heat resistance, fireproofing, and tensile strength. Asbestos was used to reinforce rigid thin cement sheeting to create what is commonly known as a fibrous cement sheet.

Asbestos was added to concrete/cement products for a variety of reasons. For example, the presence of asbestos fibers embedded in a concrete mix can reduce the occurrence of cracking in the surface. Manufacturers also sought to take advantage of the minerals' fire-resistant properties.

Asbestos in plaster walls - Asbestos was added to plaster for insulation and as a fire retardant. Unless records were kept of a house's construction and renovation work, it's unlikely that you'll be able to determine what brand of plaster is in any building.

Brands of plaster that contain asbestos:

Asbestos in drywall - If your home was constructed between the late 1930s and 1980, the walls, and the joint compound that binds them, might contain asbestos. If you have an older home, your interior walls are probably at least partially constructed of drywall, which was sold in four-foot by eight-foot panels. Decorative paneling installed in mid-century homes may well have contained asbestos, including panels made to look like brick, such as GAF's Hearthglow faux-brick paneling. Asbestos panels are generally not harmful as long as they remain in one solid piece. But if you wish to remove vintage decorative paneling and replace it with some other kind of wall surface, keep in mind that asbestos can easily become airborne when disturbed.

Asbestos insulating board (AIB) - was a commonly used material to insulate walls in residential construction. However, it's very difficult to tell if an insulating board contains asbestos because they come in a variety of sizes, designs, shapes, and colors. Because of the hardiness and waterproofing qualities of asbestos, areas of the building prone to wet conditions like bathrooms, and laundries may have asbestos sheeting or asbestos vinyl tiles in the walls. Old homes may also have asbestos-containing soundproofing or decorative material sprayed on walls.

Most asbestos walls are generally considered non-friable, which means that the material cannot be crushed by hand to form a powder. Bonded asbestos walls made of cement sheet are generally quite stable when they are in good condition and are only cause for concern during major renovation.

In order to determine if asbestos is contained within a home's wall, assess the texture of the wall surface. Is it all the same? Are there lines where a repair patch might have been inserted? Is it smooth all the way, or are there cover straps over the joins? Can you see nail heads sitting just above the surface? Is there a chair rail or picture rail, of some fashion, dividing the lower from the upper wall sections? Older styles of asbestos cement sheet may have a dimpled golf ball look and feel which is characteristic of the material containing asbestos.

You have to take into account that asbestos-containing joint compound may have been applied not only up to 18" wide over drywall joints but also in patches, repairs, around penetrations or fixtures, and in some buildings as a skim coat over an entire wall surface.

If you have access to see the back of a wall sheet you may be lucky enough to see "Does not contain Asbestos" stamped on it. It's generally not that easy though! Just because "Asbestos" isn't printed on it certainly doesn't mean it's not asbestos.